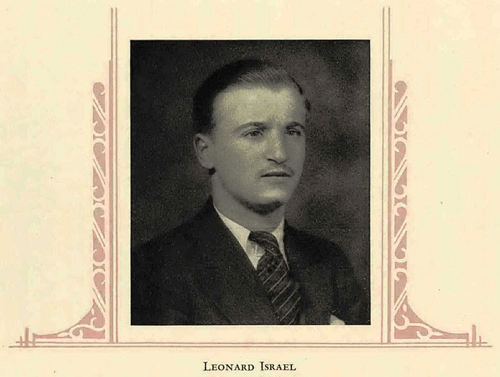 Leonard and Walter Israel were both born in New York City to Michael (Elimelech) and Yetta (née Leibowitz), who had immigrated from Galicia/Austria in the early 1900s. Originally “Isrealowich,” Michael shortened the last name over the years until it finally became just “Israel.” He worked long hours as a waiter and his wife as a store clerk to put their nine children through school, and Leonard, Walter and older brother Bernard (Benjamin) all became medical doctors. Even though Leonard, a general practitioner, was 11 years older than Walter, the two were close, and he invited his younger brother, a dentist, to join him in Santa Ana after settling there in the late 1940s. The brothers did well, establishing private practices in a shared office, marrying, and starting families. Walter’s wife Sondra (née Dubinsky) was active in local education, serving on various boards and committees, and she and her husband were very involved with Temple Beth Sholom. Both family’s descendents continue to live in the area today.