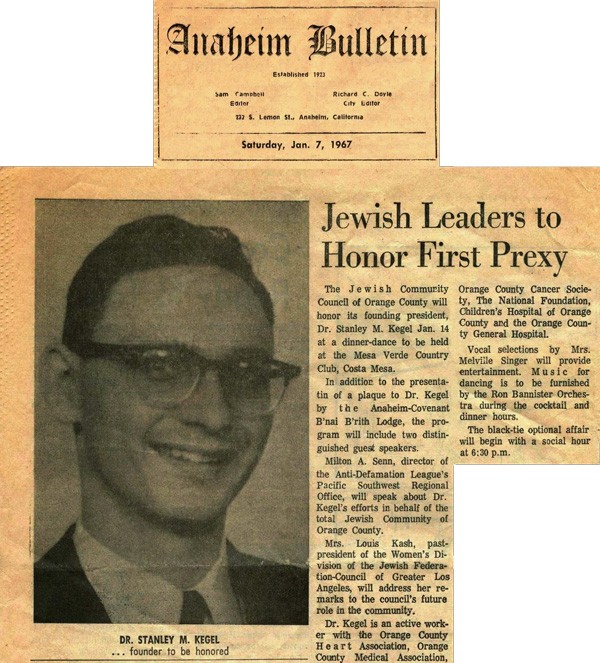 Retired pediatric cardiologist Stanley Kegel, born and raised in Los Angeles, received his medical degree from the UC San Francisco School of Medicine in 1956 and did his post-graduate work at the LA County General Hospital and the UCLA Medical Center. He later moved to Orange County, where he began his medical practice, raised his family, and became very active in both the Jewish and non-Jewish communities. Dr. Kegel was involved with, among others, the Anti-Defamation League, the OC Hillel Advisory Board, B’nai B’rith, the American Heart Association, the March of Dimes and the UCI Interfaith Foundation. In 1977, he received both the Humanitarian of the Year Award from the OC chapter of the National Conference of Christians and Jews and was honored as Man of the Year from the National Foundation-March of Dimes. As if that wasn’t enough, he was the founding president of the Jewish Community Council of Orange County (today’s Jewish Federation & Family Services OC) from 1965-1967 and received Federation’s President’s Leadership Award in 1971 “in recognition of outstanding selfless dedication and devotion on behalf of the Jewish community of Orange County.”