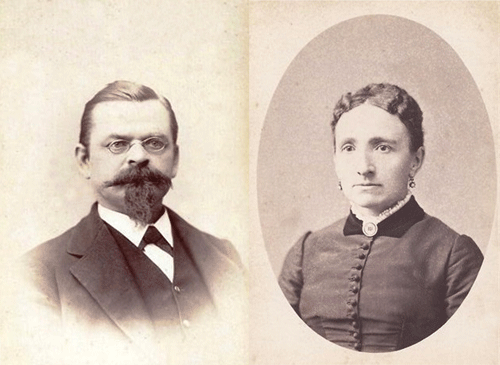 Edward Wenzel, owner of one of the original 50 plots of land in Anaheim, and his wife, Olga Charlotte Hammes, were very early Jewish pioneers in Orange County. Olga’s family was from Kalisz, Poland, where she was born in 1844. They immigrated to the U.S. in 1855 and by 1860 were living in Santa Ana. Edward Wenzel, an engraver and watchmaker, was born in Saxony, Germany in 1836 and immigrated to San Francisco two years after Olga. The two met when Edward and his brother George moved to Anaheim to start growing grapes and making wine on their newly acquired property. Unfortunately the venture was not a success and by 1870 Olga, Edward and their first child were living in San Francisco. It’s interesting to note that the Wenzels did not embrace their Judaism the way many of their fellow citizens did; they named their only son “Edward Jr.,” and their oldest daughter “Olga,” something definitely not done in Jewish tradition. And while Olga and her two sisters all married Jews, not one of their children did. For some Jewish immigrants, America was the land where you shed your Judaism in the hope that your descendents would not suffer as you did. While sad, this is part of our story here. And while some Jews did indeed “leave the fold” the good news is that most did not, and we are here to tell the tale.