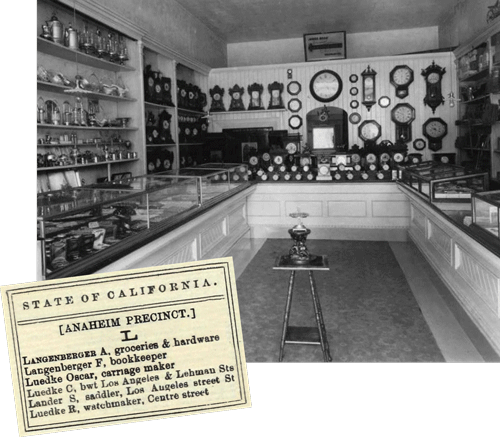 Rudolph Luedke, one of Anaheim’s earliest Jewish pioneers, was a man of many talents: watchmaker, jeweler, optician, vintner, fictional mayor (in Susan Sontag’s 2000 novel “In America”), trustee of the Los Angeles Vineyard Society (Anaheim’s first organizing body), businessman and family man. For years, the Luedkes owned a watch-repair and jewelry store in Anaheim and were among the town’s most respected families. Rudolph and his wife Malvina, both of whom had immigrated from Prussia in the 1850s, owned a large plot of land on which they built the family home, various outbuildings, and their well-known elaborate gardens. Sold and subdivided in the late 1880s as the city was growing, the area is known today as the Kroeger-Melrose Historic District, roughly bounded by Lincoln, Kroeger, Broadway and Philadelphia streets, and has been officially listed on the National Register of Historic Places since 1985.